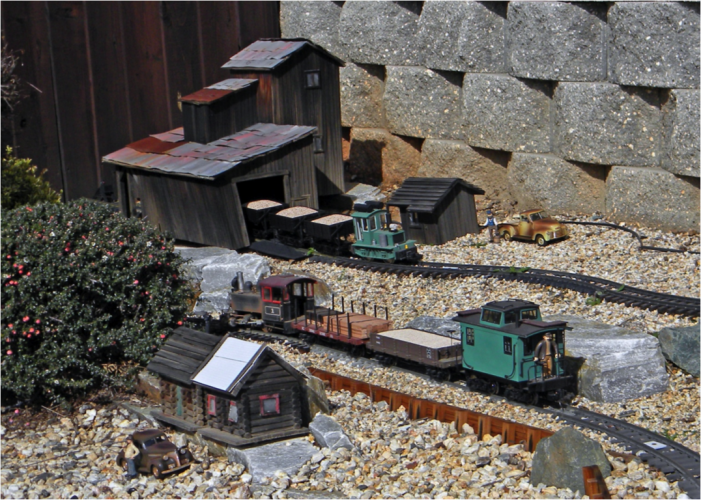 Notes: Steep walkway to back yard (about 50 ft.)

Our layout was started in 2002 and has about 300 feet of track with three loops and one point to point. Track powered. The theme is early 20th century western U.S. 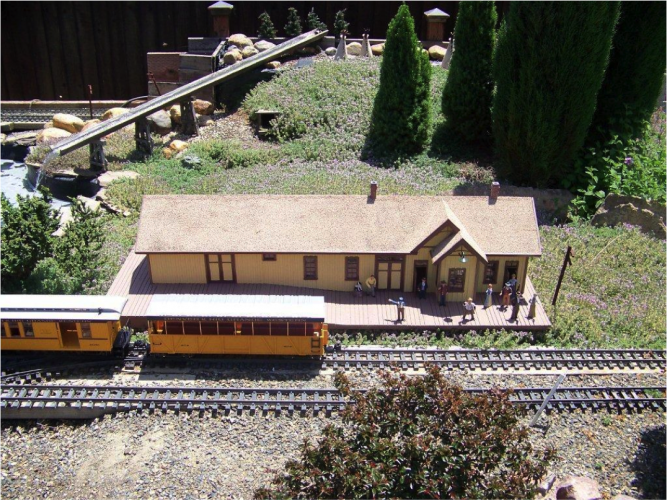 The Badwater & Western Railroad consists of 500 ft. of track. The upper level of the layout is in a raised area bounded by 27 inch stone and timber walls. The period modeled is early to mid 1900’s, western mountains with mining and logging. On the raised area the train passes through a tunnel and by a pond with a flume to transport water. The railyard is in a shed and is connected to the raised area by a 30 ft. trestle with bridges. The raised area has 780 ft. of track and returns to the main line on a 60 ft. trestle with bridges. All track in the upper areas consist of an inner and an outer loop. There is a ground level loop that passes through a short tunnel under the raised area. The rolling stock and locomotives are Bachmann, LGB and USA and it is all track powered using DCC. All of the structures are scratch built from redwood. 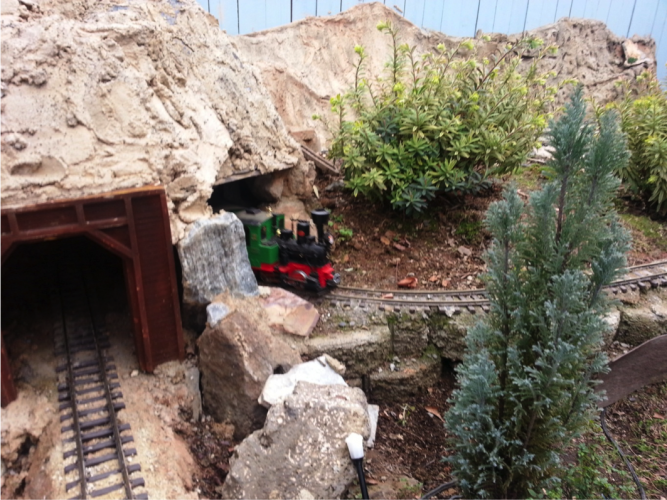 Two layouts – 1 in the front yard and 1 in the side yard – follow the signs. Started as a simple loop around a pond, stream and waterfall we then had a car crash into the yard and rebuilt, with expansion, twice! We are still not done. (Is anyone, ever?) We represent fictional railroads in the 1930’s to 1950’s. The Pyramid Lake Express plus a point to point runs on about 150 ft. of track with bridges, tunnels and two water features. There is a small independent loop on a hill above the PLE main line that also goes through one side of a double tunnel and has a bridge. One about 30 ft of track in the front yard, we have the Elevated Light Freight (ELF) which specializes in small engines, cars and seasonal trains. Look for the changing scene at holidays! Buildings are an eclectic mix of commercial, scratch built and converted bird houses. Plantings, roads and “farmland” make interesting vignettes. 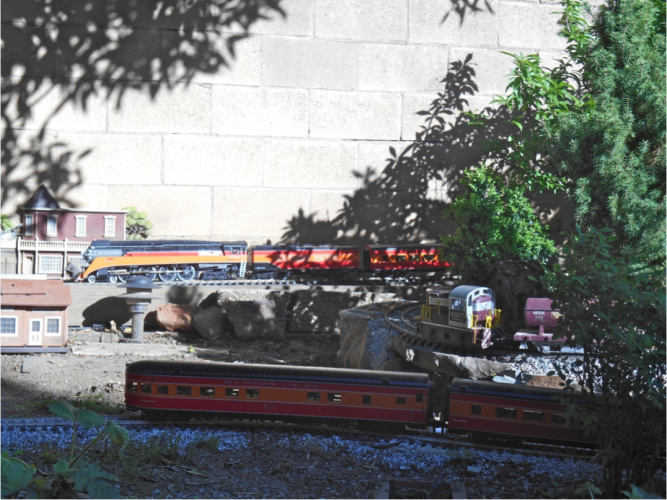 The Denver & Pacific Falls RR is located “way out west”, sometime, somewhere. Free-lance, norminally 1:32 scale with a lot of other scales. Equipment has Kadee #1 couplers and metal wheels. I use Bridgeworks and other power supplies with Aristo-Craft Train Engineer or MTH DCS throttles. There is about 200 ft. of outdoor track & 80 ft. of indoor rail yard. A water feature, short train loop and trolley track are complimented by ground cover of ajuga (“chocolate” and “reptans”) and micro miniature roses from Moore Nursery, Visalia. Many buildings make up an interesting if small layout that has overcome the removal of a major tree changing the area from shade to sun. 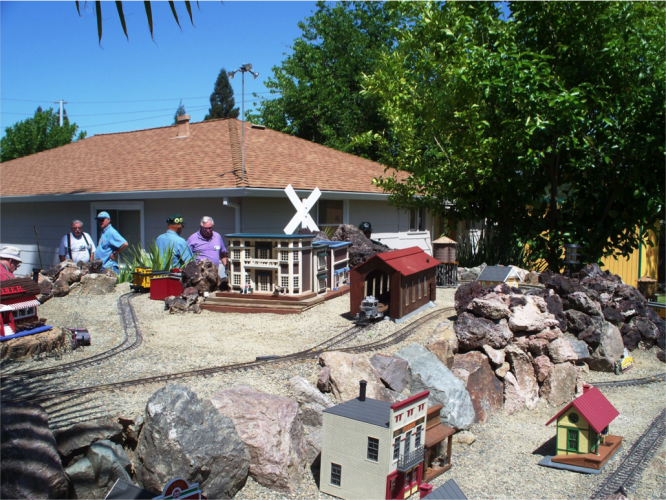 Building of the layout started in April 2003 and has around 350 ft. of track. We represent the Virginia & Truckee Railroad - Virginia City to Carson City, Nevada. In 2003 I built a full size V & T Caboose. The garden railway on the hill was built in 2004. Our equipment includes V & T, Rio Grand Southern Geese, Eureka & Palisade and more. We also have a Ruby live steam engine. There are two power packs, one for each level – two MRC train power 6200s, plus three small G gauge transformers inside the caboose. 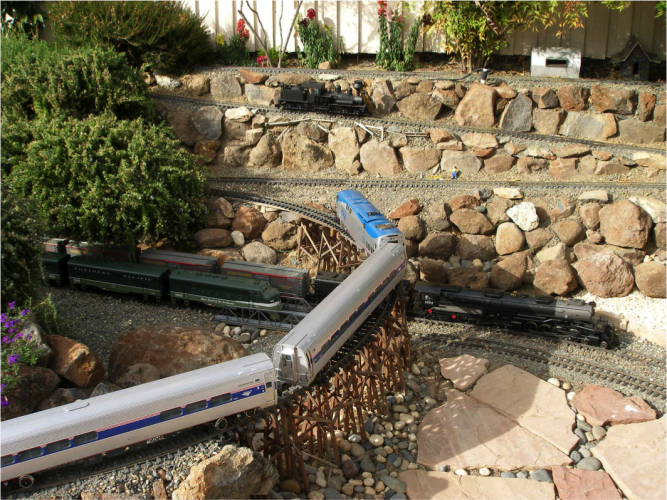 This is a 1940’s to 1950’s era standard gauge railroad consisting of two 200 foot loops and one 200 foot dog bone loop around the perimeter of the backyard. It passes through a rock garden and three water falls. A narrow gauge mining and lumber operation is also featured. 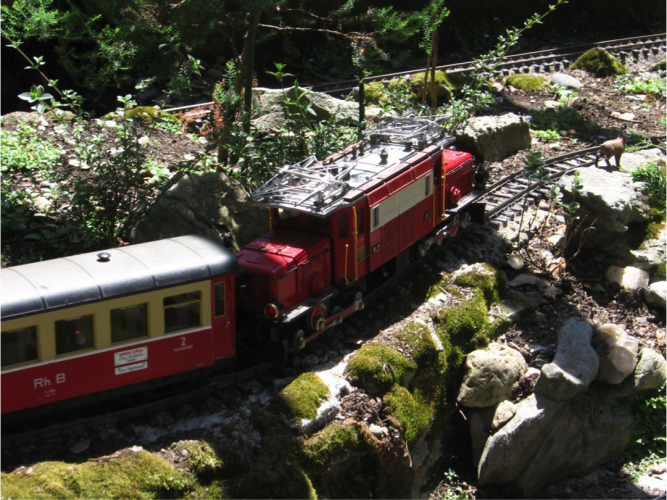 This layout was inspired by the Swiss Alpine rail lines, particularly the Bernina Express of the RhB. One of the model trains is a replica of this train and all engines and rolling stock are LGB European models. The layout is an automated three train, track powered operation with trains alternately leaving the main station at the front of the layout. The storage yard is also automated, with the movement of the trains controlled by a central control panel. This is a compact, folded over loop layout approximately 10 by 20 feet, landscaped with small trees, waterfall and pond. There is also an eleven track storage yard. 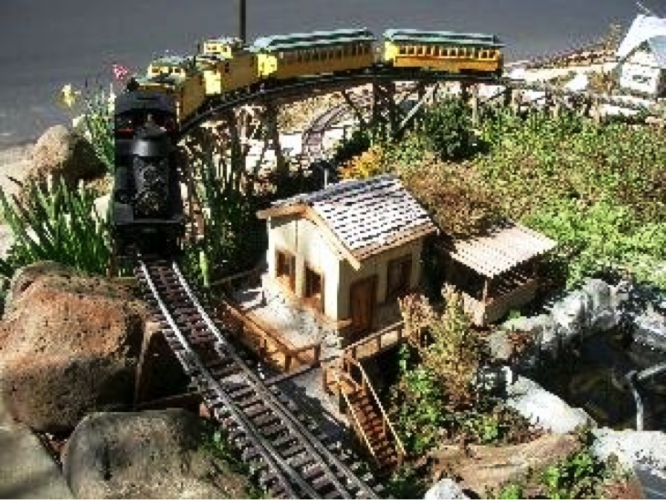 My railroad is Royal Crest Circle Route of the Rancho Cordova Community Railroad (RCCR). I went to the 2003 National Convention and got hooked! Traded in my “N” for “G”. We represent the 1940-1950 era. Did some research and decided to go battery power. This would allow me to do reverse loops without complex wiring. Living in a senior manufactured park, space is restricted. I can maintain line of sight on less than one-half of the 280 feet of track at any one time. Consequently, the operator has to stay with the locomotive all the time. Many unique, scratch built buildings including a multi-stored apartment building and a “rec” center with a ballroom (complete with a “Disco Ball”) and appropriate planting make this an unusual layout. 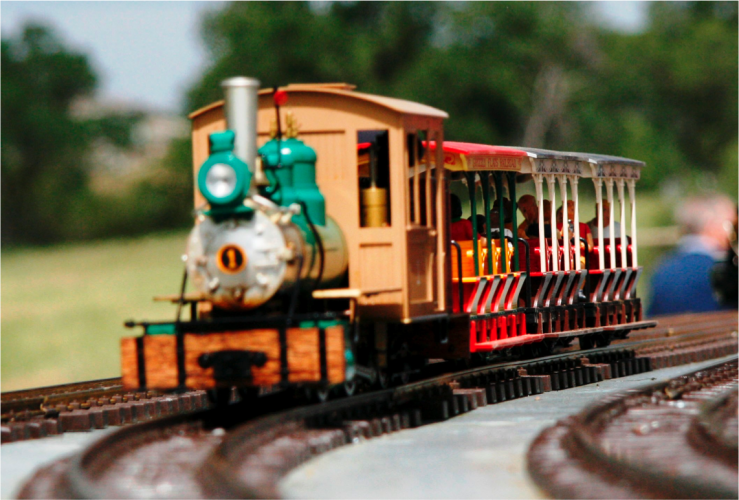 Notes: Some uneven concrete in pathways.

Our layout has changed size, location and theme several times over the 22 yrs. since I bought my first live steam locomotive. The electric one is towed the backyard and the live steam layout is between our house and the electric layout. The outside loop is 124 ft. and the inside loop is 88 ft. It is raised about 21 in. with a concrete walkway all the way around. The track is powered by two PH510 power supplies. Anyone wishing to bring equipment to run is welcome to do so. My steam table is 30 ft. by 23 ft. and raised 39 in. with a bridge to access to access the inside track. It has 2 tracks. Daylights and Cab Forwards can run on either track. Anyone wishing to bring locomotives are welcome to do so. I will have distilled water and steam oil available.