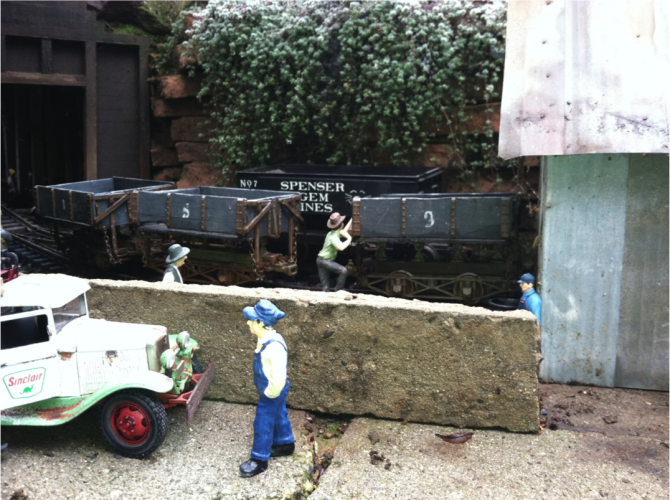 Main line is approx. 100 feet of code 332 Piko brass with Hillman clamps. One spur goes to Red Cat Timber Company and one to Spenser’s Gem Mines. Minimum radius is 4 feet. It is backwoods, narrow gauge set in mid 1955. With two tunnels, a pondless water feature, and several bridges. It uses track power and is mostly 1:24 scale equipment. Structures are a mix of scratch, kit, and pre-assembled. The first FE Line was MUCH larger, and moving to this neighborhood presented the challenge of building a railroad in a small yard without making the railroad look too cluttered. The railroad pays homage to our cats past and present. The example, Maggie’s Gas recalls our long-gone flatulent kitten and Tripod Photography is a remembrance of our little three legged Persian. Our Guiding Code: Railroading is supposed to be fun. Rivet counters will be promptly escorted from the property! Gardening Tip: When pulling weeds on the layout, if it comes out easily it was probably an expensive plant. 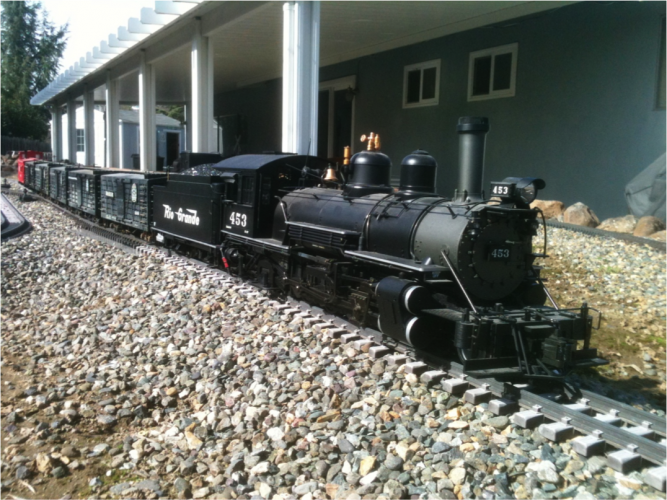 Began construction in June of 2005. I stopped between 2008 and 2013 but resumed in Sept. of 2013 and am continuing at present. The track length is constantly growing. How far the main line reaches by the WCRM depends on how hard the Gandy Dancer works. The Alpine Railroad is a free lance railroad that is located somewhere in Colorado during the late 1930’s and 1940’s. The mountainous valley is rich in lumber, agriculture (in a mountain railroad? It’s fictitious, remember) and silver ore. The main obstacle to building, besides lack of time, is the grades in the yard. It slopes in two directions at 12% and 18%. The railroad is battery powered. I use the Airwire battery power system. Presently there aren’t any plants on my railroad, just track, ballast, rock and dirt. Oh yes, and trains. There may be a water feature by the time of the meet. It just depends on how much I get done by then. 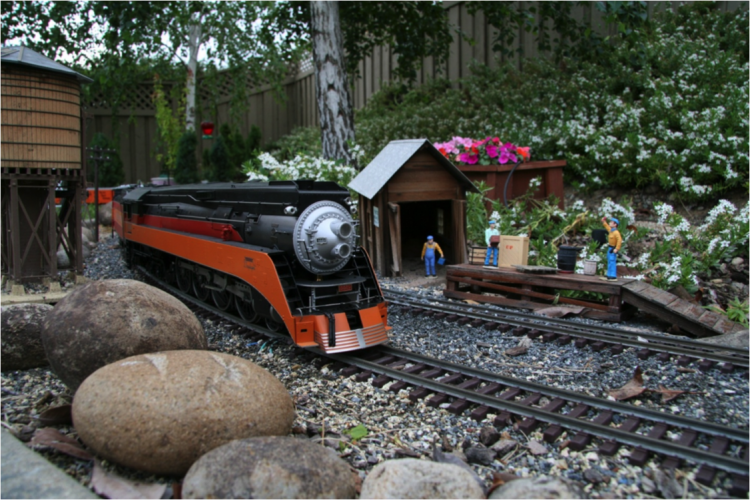 Rock Valley Railroad is a 1950’s setting on the Southern Pacific system with steam and diesel power. The railroad has approximately 300 feet of main line generally in two interconnecting loops with wide radius curves on a level yard. We have mature landscaping with Alberta spruce, boxwood, elms, cedars, myrtle, a waterfall and creek. There are several period buildings (scratch built, kit and purchased) with many signs and scenes that enhance the landscape. Lincoln has lots of rocks – we used every one in the yard. Generally, equipment is 1:29 and 1:32 scale with some narrow gauge locomotives. This is a running main line railroad with little switching along the line other than the main staging yard located along the side of the residence. 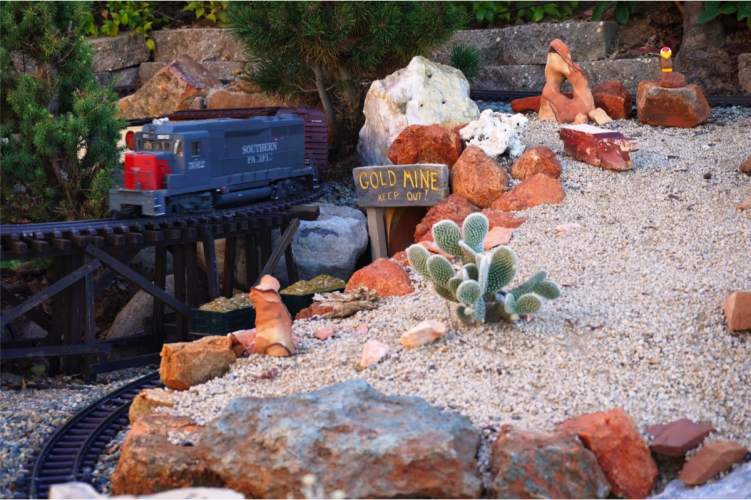 Begun in 2002 we have about 400 feet of track. Represented are the Southern Pacific Railroad and the Virginia & Truckee Railroad (passenger and freight trains) during their active years including steam and diesel. The layout includes a 360+ loop, tunnels and a water feature. It all fronts on open space that gives it the appearance of a larger layout. We are all track power. I have overcome many difficulties to get six trains to run at one time without any direct control. There are many small plants and trees, hand built buildings copied from the original and hand carved figures to fit into the scenes. 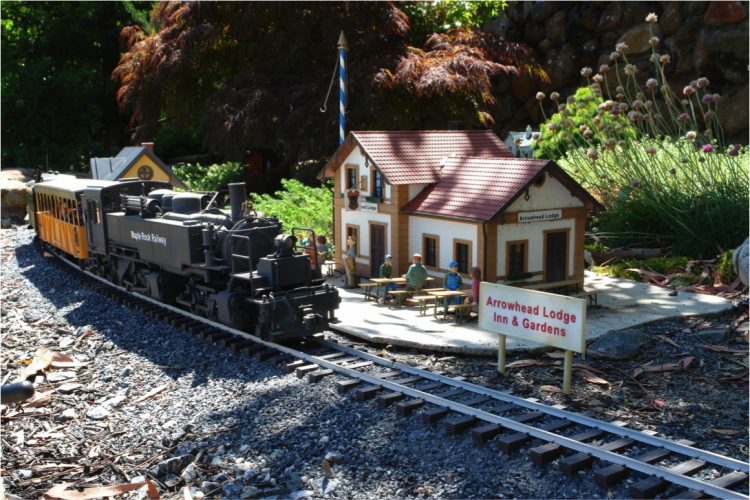 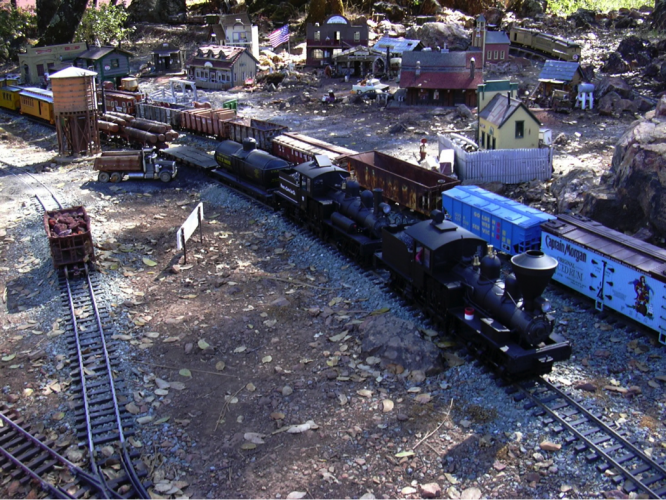 The Coyote Pass Railroad is 11 yrs. old and was built in a rugged, rocky area following the natural land contours. The railroad depicts a standard gauge mountain division line with narrow gauge characteristics. Motive power ranges from kit bashed steam relics to late steam and diesels of the 1950’s and 1960’s and a completely out of place GG1 for the gold mining and lumber settings. The railroad main line is comprised of 700 ft. of Llargas Creek code 250 rail, bent for broad curves. The ruling grade is 2%. There is also a 90 ft. short line with sharp curves and a 6% grade that services a lumber camp. A 5-track yard with 100 ft. of track is housed in a low car barn. A connected off shoot of the railroad is a large live steam track that can be used as a wye for main line operation. The railroad uses both battery and track power. Features include a 35 ft. elevated water flume powering a sawmill, trackside signals, sound and an extensive locomotive repair and maintenance facility and turntable. The over 100 buildings, bridges and trestles are mostly scratch built and include animated features for the coaling tower, lumber mill and steam donkeys. Most of the buildings light up for nighttime operation. 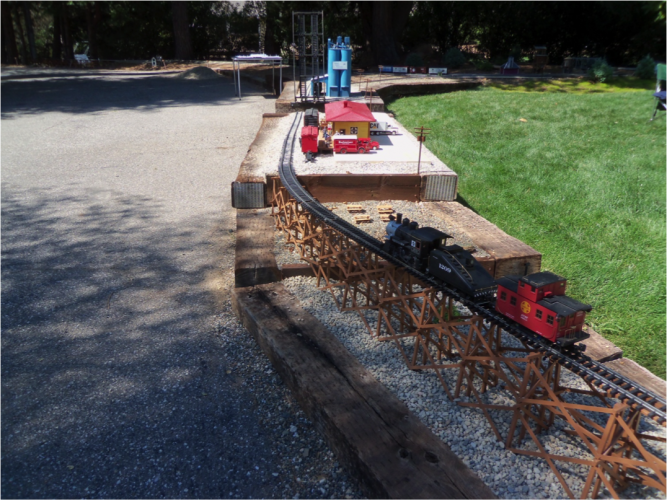 The Atchison, Topeka and Sante Fe, LOP Division railroad (2 main lines) was started in 2010 and reflects the 1940’s-1960’s era. This is a main line railroad which passes through mountains, desert and a water feature where the main lines are supported by a 13 ft. bridge. Main line #1 is 520 ft. and #2 is 502 ft. laid out in a three circle figure 8. There is a crossover with a tunnel and an at grade diamond. There is also a 185 ft. wye point to point as well as an independent 190 ft. loop called The Thomas Loop. Also included are 2 passing sidings, 1 spur, a 3-track yard, 2 tunnels, 5 Eaglewings built bridges, and 6 trestles totaling 97+ feet made from painted PVC. Other features are an oil refinery and a water tower and propane tank that hide pop-up sprinklers. Track is all Aristo-Craft stainless steel and curves are 16.5 ft. to 20 ft. diameter. Locomotives are powered with battery and track power. Rolling stock is Aristo-Craft, USA, LGB and Bachmann. 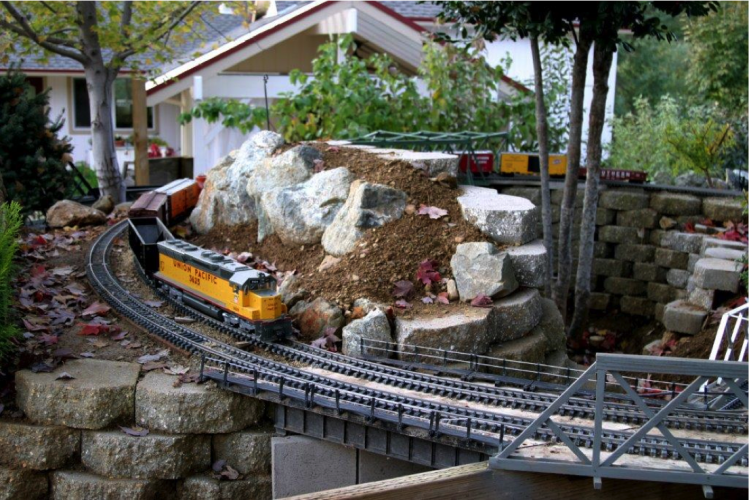 The D & P Lines began construction in the summer of 2004 with 30 yards of dirt dumped into a 24 ft. by 60 ft. frame that would contain the railroad. Built on a gentle slope (1″ drop per foot), the walkway that surrounds the layout provides eye-level perspectives as well as bird’s eye views. Trains run on one continuous 550′ loop that doubles over itself four times, traveling through 9 tunnels and crossing 14 bridges. The route begins at Dublin City on “Level 1″ climbs to Pfozen (a German village) on “Level 3″, then descends to the starting point. Even though it is 10 years old, the D & P is NOT COMPLETE! We faced a major adjustment of tunnels when freight trains began hauling double-stacked shipping containers! More structures are still needed. We add new plants regularly, and always seem to need MORE ROCKS! In between runs, trains live in a special “train shed” adjacent to the layout, with fold-down bridges for entry and exit. Trains run on battery power with Airwire 900 controllers and all switches are pneumatic, controlled from the elevated Control Tower in the center of the layout. (Yes, you are invited to visit the Control Tower. Cameras welcome-good shots are easy!!) 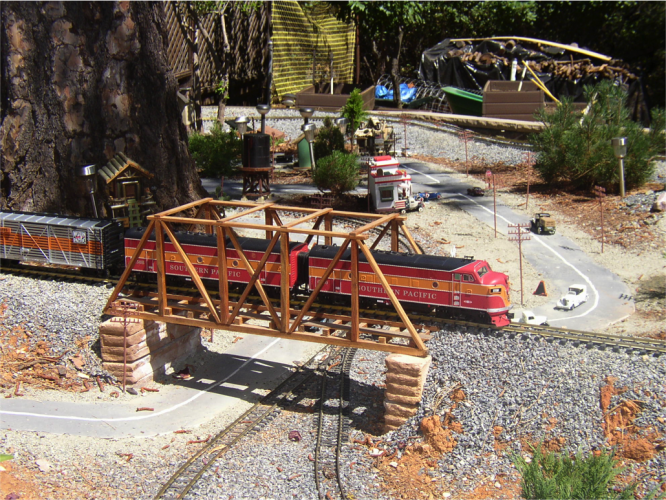 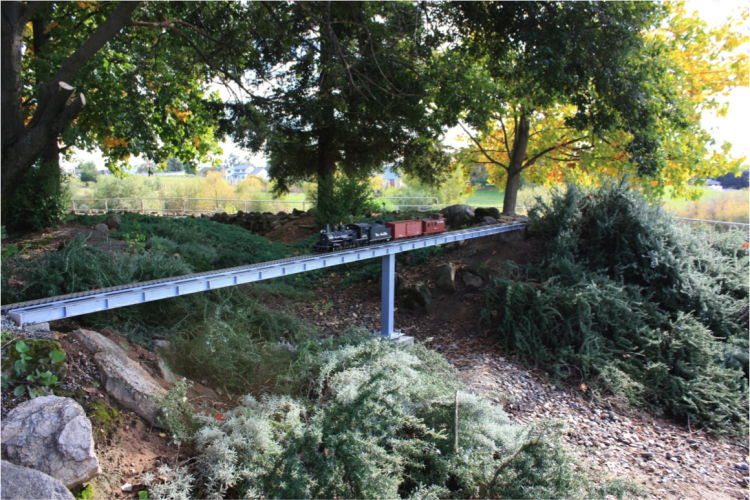 Layout: There are two separate layouts. One is the original on the ground layout. The other is an elevated table type layout. The on the ground layout has a 350 ft. main line run with a total of 550 ft. It features a 20 ft. deck girder bridge and an 8 ft. steel truss bridge plus several smaller bridges. The elevated layout has a main line run of 240 ft. with a total of 420 ft.