I have a railroad in the garden as opposed to a true to scale garden railroad. I do not have a major theme as I run steam and diesel. I also run some Thomas the Train for my grandson. I started in 2000 building a retaining wall, filling it will approximately 50 yards of dirt. I have 4 tunnels and 5 bridges. It is a work in progress as I still have an expansion area that is not complete and the ongoing landscaping in the established areas. I do not have a very green thumb so I have to replace a lot of plants and ground covers that do not make it. My main purpose for building the railroad is I love trains and love to run them. I started in N and when I could not see it anymore I went to HO. When HO become hard to work on I went to G. I guess when I can’t work on G any more I may have to give up railroading. 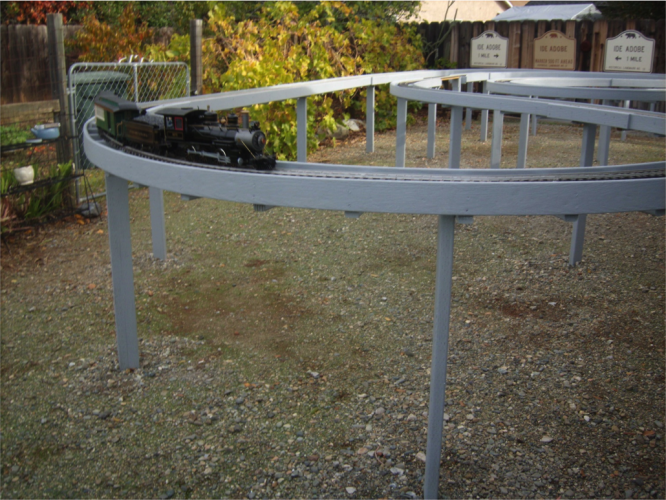 My G scale railroad is mainly circus oriented with some logging. I have 3 different layouts. Two layouts are in my train room. One is located overhead with 2 circus trains and one work train and has parallel tracks. The second layout is a 9 X 12 foot table with contains many buildings, lighthouse, coal dumping bins, and also a waterfront. This layout also leads to the outside tracks which are elevated at about three and one-half feet and has a yard and town. The overhead tracks consist of about 90 feet, the table layout has approx. 50 feet and the outside track is 120 feet plus three sidings. Layouts can be seen at the Shasta Garden Railroad Society website and Humbughelangon.com. 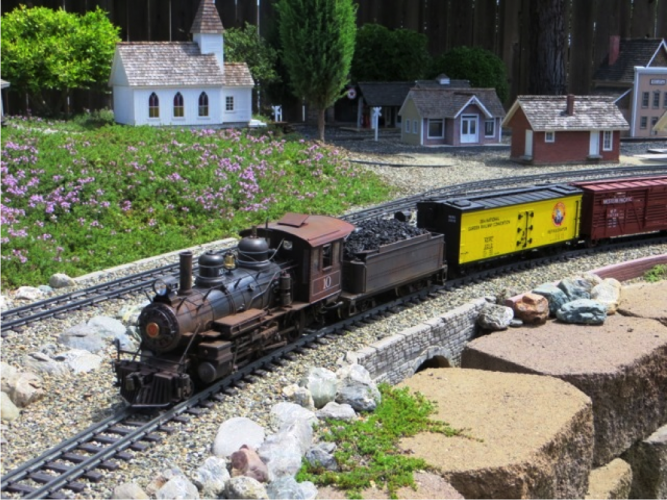 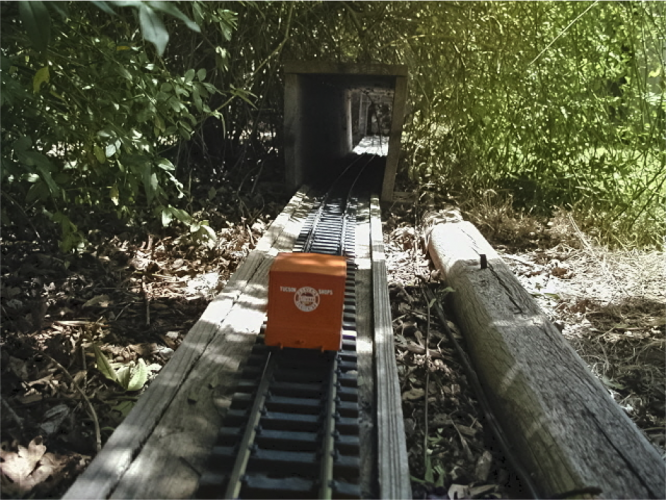 Note: Handicapped accessible except some areas of rear and side yard.

The first layout was built in 2002 in the rear yard using redwood fence planks as a ground level roadbed. Later negotiated right of way through the side yard and over the front yard. The independent running loops can be joined together for long runs. I just built a new elevated roadway with dual track designed for live steam. Track length is 850 feet. I have Aristo-Craft Train Engineer for power. Still fighting acorns and heavy leaf debris in the fall but have no grass left. The entire lot uses small bark with ornamental plants interspersed. The result is a practically weed free landscape. 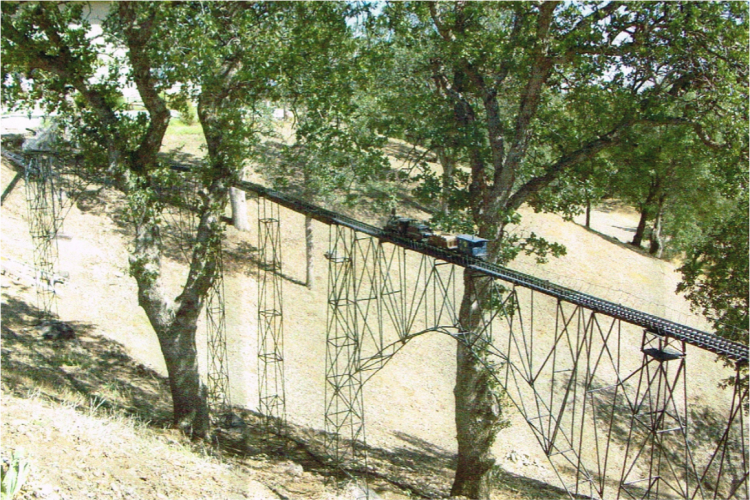 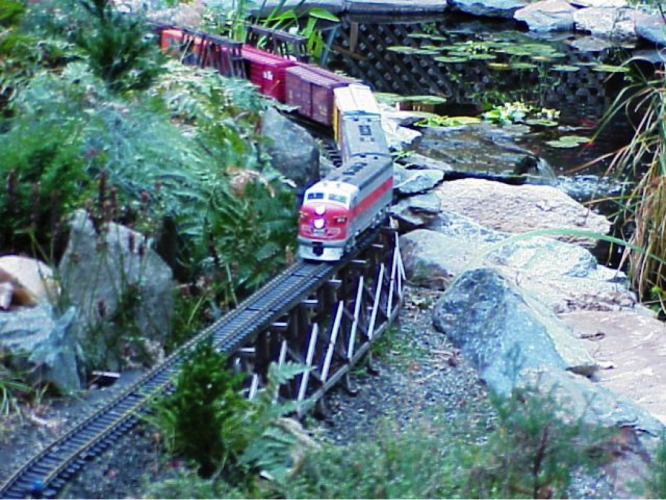 Note: Handicapped accessible with level and sloped hard pack trails, some wide enough for a wheelchair.

We began building our railroad in 1999 after viewing a display from the SVGRS. We are in the mountains above Lake Oroville and have named our line after the now extinct Feather Falls Lumber Company line. We had the idea of building a small layout around a small pond (20 by 8 ft.; 3000 gal.). It has grown a lot larger than we originally planned. We now have about 450 ft. of track with multiple bridges (one 5 ft. long) and trestles that traverse the layout along with a tunnel that goes under the waterfall that supplies water to a large pond (8 by 50 ft.; 6000 gal. and 3 to 4 ft. deep) that we named Lake Oroville. Our goal has been to give people a relaxing experience. We have walking paths around the layout as well as many seating areas to stop and enjoy the gardens and the two large ponds which the railroad travels around and across. We have planted the layout with many dwarf trees and plants that blend well with the tall native pines. We have track and battery powered engines. We have a real Southern Pacific Caboose on the property that is a work in progress. We are located in the mountains above the town of Oroville. It is about a 30 min. drive from town and you will travel around Lake Oroville crossing two bridges. This is a great drive and we hope that you will take the extra time to visit our railroad.